There has been a long term back-burner project for me to make the perfect beer to match Indian food and to plug a major gap for craft beer in the Indian Restaurant Market. Someone has beaten me to it....

Today while on a trip to Saffron Walden to look at some  Brewlab brewing kit we went to Indian Summer Brewery. A new 10 BBL plant in a prefabricated wooden shed, inside a large warehouse belonging to a Timber Merchant. A very strange set up indeed and not the place I expected to find someone brewing beer with the sole intention to sell to Indian Restaurants. However the sparge was on when we arrived, and 8 barrels of pale wort was being transferred into the kettle by brewer Jules and consultant Mike Hitchen from Brewlab. 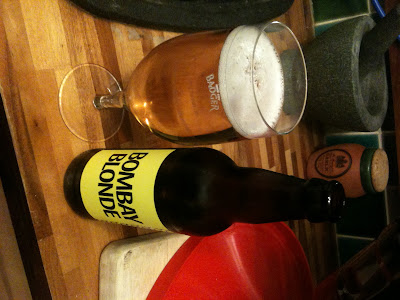 So what is this beer? They call it Bombay Blonde and the website is set up for the beer not the brewery. I don't like the name but the branding is certainly distinctive. It pours clear pale and well carbonated, a must to cleanse the rich sauces from the pallet, although the head disappears quickly. Quite subdued on the nose but really refreshing and fruity on the palate. Good strong bitterness should play well with the spicy food. I did not have it with a curry but it went down a treat as a post gym pre dinner thirst quencher, so perhaps not such a one dimensional beer.

If I was being picky I would like something with a bit more alcohol (it is 4.5%), it may match the food a little better. However if I was in an an establishment that was serving this beer and the other options were Cobra and Kingfisher....it would be a no-brainer to choose this beer.

I believe this beer is being launched on Thursday 26th in Brick Lane...London beer people go check it out.
Posted by dredpenguin at 13:45